December known as ‘silly season’ aptly or not, is a month of merry-making with holidayers dotting different places.  Children joyfully look forward to the prospect of school-closing followed by festival-booms. The students who pass out successfully have a whale of a time especially the high-rankers in Matric as media gives lot of attention to the winners. They tire themselves out with routine partying extending to midnight. They are overwhelmed too receiving gifts galore. Amidst the hullabaloo all around, somewhere some child is falling prey to the most detestable act – that of committing suicide. Sri Ramakrishna warns about the result of suicide and terms it ‘heinous’.

It is of course a cause for great concern for the parents whose son or daughter fails in an examination. The trauma that it has on the remaining members of the house-hold is tragical.

A research project at the Nelson Mandela School of Medicine in South Africa indicates that suicide is on the rise in the country and that children as young as 10 are dying by suicide.

“Our youth are increasingly attempting or committing suicide as a result of depression,” said Michelle de Sousa, Project Manager of the South African Depression and Anxiety Group (SADAG).

When I was ruminating over this easy escape-route of the weaklings, a mail attracted my attention. It was written by MM, a devotee of Sri Sarada Devi Ashram, Durban.

She said in her mail that “This morning I read an article in the Jyoti Jul – Sept 2012 issue, on the President’s Page…..Thoughts on Suicide. What gems are in this article! It will be a good idea for Maharaj to Post this article on Maharaj’s blog, so thousands that do visit the blog can help share this message. During this period lots of Children await Matric and University results and suicide is at its peak. With the gems in this article it could help avoid many suicide cases.”

Interestingly I remembered the Conference on Hinduism that was conducted by our Estcourt Satsang Group on the 29th July, 2012. Unfortunately I could not attend due to my ill-health at that time and hence I sent my Benedictory Address to be read out by one of our Exco members there.

I reproduce that Address here for our readers because of its relevance  to some discussion on this sad subject. The below one is the Invite. The programme was inaugurated by VC Maharaj, Superintendent of Education, Northern KZN and attended by about 300 delegates. Interesting Papers were presented by three Panelists.

Benedictory Message by Swami Vimokshananda, the President of the Ramakrishna Centre of South Africa

By the grace of Master, the Northern Natal Hinduism Conference, after making its rounds through the various towns, has come once again to Estcourt.

Brother Swami Saradaprabhananda and officials from the HQ join me in extending our heartiest congratulations to all the participants and delegates.

I feel that great effort and brainstorming activities must have gone into the choosing of the topics, for they are so topical and so relevant today. It is obvious that by this point of the programme each one of you should understand more clearly what life, what its challenges are, and how we may address them.

Swami Sivananda, the Founder of Divine Light Society, Rishikesh says that “Life is a pilgrimage. The wise man does not rest by the roadside inns. He marches direct to the illimitable domain of eternal bliss, his ultimate destination.”

But during this journey of unfolding and developing, we will find that life is constantly throwing up one difficulty after another, that many a time presents itself before us as insurmountable. We do fall, even a thousand times we fall, but we should, nay, must, rise again.

For that indeed is the very purpose for which we have been born. The great Swami Vivekananda likens this world to a gymnasium where we have to build and strengthen ourselves. He said he wanted us to have  “muscles of iron and nerves of steel”. As the Upanishad says, Brahman is not for the weak. (na ayam aatma balaheenena labhyaha). Again, Swamiji himself made a religion out of strength. Strength is life, he said, and conversely, he declared, weakness is death.

We often describe life by such words as ‘progressively stressful’, ‘far too complex’, ‘too fast’, ‘incomprehensible and unfair’. And at some tragic moment we ask that momentous question ‘What am I living for?’ Then we start to deliberate like Hamlet and weigh our options: either to ‘bear the slings and arrows of outrageous fortune’, or ‘to die, to sleep’  – that is, to face the world and its troubles head on; or, to give in and end our life.

But suicide has never been an option for the Hindu, nor is it an option in most religions. One of the tenets of Hinduism is the belief in reincarnation. Each birth is a successive opportunity for self-improvement. We continue in one birth where we had left off in the previous one.

Committing suicide is again deplorable because it actually deprives one of an opportunity to improve oneself through this physical body. 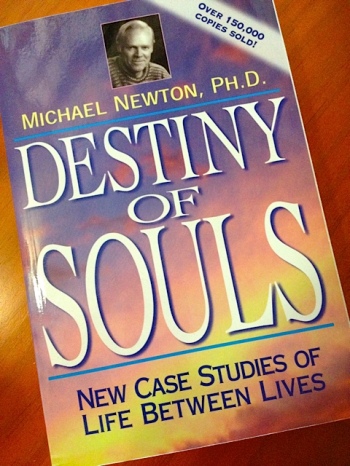 The act of suicide is nothing more than a huge backsliding in our spiritual progress. We will meet in our next birth the same or similar set of circumstances that prompted the suicide in this birth, and we will have to willy-nilly come to terms with that. So ending a life causes not only a personal suffering, but also the pain and anguish that one brings to others in our lives. And that, of course, has it’s own karmic effects.

The very thought of suicide and its implications for oneself and for others, in the present birth and in births to come, is frightening. On the other hand there are heroic tempered ones among us who welcome difficulties.  In that fascinating book by Dr Michael Newton entitled Destiny of Souls, he tells us that many people actually choose to be reborn in difficult situations just to be able to get over that particular hurdle or difficulty. It is a means of strengthening the Self.

There is another view to suicide that we often do not touch upon. While on one level it is a ‘heinous sin’ as Master Sri Ramakrishna said, that is, in reference to the destruction of one’s physical body, it is also the harm and pain that one inflicts on one’s soul by losing the opportunity to perform due sadhana. Not striving for spiritual perfection is a worse type of suicide than the physical suicide.

Those qualities and characteristics that will deter us from the precipice of suicide are to be cultivated by parents and taught at our Hinduism classes. Each child must be taught to be divine. If every teacher can teach every child under his/her care, if every parent, can make every child aware of themselves as ‘potentially divine’, and that they can and must realize that potential divinity, I think both parents and teachers have achieved much. The growing children will work out the details themselves.

Sri Sathya Sai Baba puts it very well when he says: “You have come from God, you are a spark of His Glory; you are a wave of that Ocean of Bliss; you will get peace only when you again merge in Him. See God in every one you meet; see God in every thing you handle. Live together, revere each other, let not the seeds of envy and hate grow and choke the clear stream of Love.”

Every child should know that though there are sharks in the sea, there are safety nets that make sure their safe swimming. That sense of security must be there in their daily lives, but at the same time, they should know that they enjoy greater freedom, that they will fall, that they must rise again; and most of all, they must take responsibility for their own actions. Today we tend to blame our parents and society. Though we may use such fine sounding terms as hereditary factors and socio-economic pressures, it still means that we are putting the blame elsewhere.

But we must help each other. However, we should not become over-enthusiastic like the man who wanted to help the butterfly to break out of its cocoon quickly, but really caused it to die by his untimely interference.

Swami Vivekananda tells us that our minds are great receptors that attract other similar thoughts. Day in and day out, thinking weaker thoughts can only plunge us deeper and deeper into depressive states. On the other hand, positive and creative thoughts will repel such negative vibrations.

And that is why such habits as reading good literature (and by this I do not mean only religious/spiritual literature, but anything that will uplift the mind, for instance a good piece of poetry, a discussion on Art, Music etc,) are so essential. Then of course, attending satsangs should become a habit. Like the habit of drinking tea or coffee in the morning – if we don’t have it, we have missed something. Regular sadhana, singing (and other hobbies), recital of or listening to hymns – all contribute towards developing a positive mental attitude.

It is not a sin to feel low in spirits, or feel the weight of the world. It is a sin when we do nothing about it, or take the apparently and foolish way out. Today we have been inspired; we were given such psychological and spiritual tools and the know-how to use them.

To enable us to face the future boldly, to march on fearlessly, and whenever possible, to lend a helping hand to the fellow traveller.

I wish to express my sincere appreciation to all these three learned speakers who in spite of their busy professional schedule could make it convenient to participate in this august Conference.

I wish I were here listening to the elevating thoughts of the speakers.

We hope that this Conference on Hinduism has prompted you to think over a little leisurely, to cogitate much more deeply, and to find some interesting solutions finally.

I deeply appreciate the Chairperson and the members of our Estcourt Satsang group in organizing this Conference successfully.

8 thoughts on “Set aside suicide”