In criticising another, we always foolishly take one especially brilliant point as the whole of our life and compare that with the dark ones in the life of another. Thus we make mistakes in judging individuals.

– Swami Vivekananda in Notes from a lecture on Bhakti Yoga

How many of us can refrain from critisizing others in spite of reading again and again the wonderful precept of Holy Mother Sri Sarada Devi who advises ‘not to find fault with others’? Most Revered Srimat Swami Vireswaranandaji Maharaj was once the butt of criticism and of all persons, the ‘fault’ was reported to no less than a direct disciple of the Master, Sri Ramakrishna. He was Swami Akhandanandaji, the popular ‘Baba’, known otherwise ‘Gangadhar Maharaj’ (Swamiji named him ‘Ganges’). He was childlike and was quick to correct himself when his actions ran contrary to the definite words of Swami Vivekananda, even when pointed out by junior monks. He bore great love for Swamiji. The following reminiscences by Swami Vireswaranandaji are indeed interesting and instructive, and bear testimony to “Baba” Maharaj’s love of Swamiji. Swami Vireswaranandaji was the Tenth President of the Ramakrishna Order and my holy sannyasa Guru. These excerpts were taken from the new book “Swami Akhandananda – As We Saw Him” published by Advaita Ashrama, Kolkata.

Bespoken behind does, it gives pain but also seems to do some good to the receiver of criticism! When ‘wounded to his depths’ which means deeply hurt because someone spoke wrong things in your back, how does a man reacts? Let’s hear what Swamiji wrote to “a dear one”:

“the whole of life is only a swan song! Never forget those lines:

The lion when stricken to the heart, gives out his mightiest roar.

When smitten on the head, the cobra lifts its hood.

And the majesty of the soul comes forth,

only when a man is wounded to his depths! 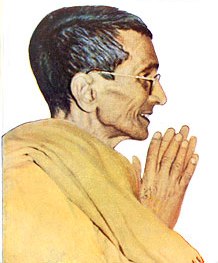 I shall now recount one or two incidents to illustrate the Swami’s deep love and reverence for Swami Vivekananda. Once when I was staying at the Advaita Ashrama, Gangadhar Maharaj was for some time at the Kolkata residence of the Rani of Puntia, whose grandsons were the disciples of Swami Saradananda. A devotee who was staying for one or two days at Advaita Ashrama, spent a little money and fed the monastics with rasagollas and green coconuts during the noon-meal. As we finished our meal, a monk arrived from the Udbodhan. He too had a share of sweets and coconuts.

Later he met Gangadhar Maharaj and said to him, ‘Maharaj, today there was a sumptuous feast at the Advaita Ashrama. There were plenty of rasagollas, what to speak of green coconuts!’ And then he added, ‘Maharaj, you are here and there was such a big feast at Advaita Ashrama, and they did not invite you?’

On hearing this, the Swami said like a boy, ‘How strange! I am here so near, and Prabhu did not invite me? Wait, let him come!’

The monk came back and said to me, ‘I have lodged a big complaint with Maharaj against you. Wait, when you meet him this time, you will see the fun.’

A few days later, I went to visit Gangadhar Maharaj. After I saluted him and sat at his feet, the grandchildren of the Rani of Puntia and one or two monks – among whom was the one who had reported against me – all sat down there, eager to see what would transpire. Gangadhar Maharaj sat very grave, uttering not a word. I too kept mum.

After a while he said, shaking his index finger at me, ‘I have something to say against you.’

‘I too have something to say against you,’ I replied.

‘What have you got to say against me?’

‘Please tell me first what you have to say. After looking into your charge-sheet, I shall speak out what I have to say.’

‘Then fix up a judge,’ said Gangadhar Maharaj, like a little boy.

‘You will be the best judge,’ I said.

‘How can I be the judge when I have brought an accusation against you?’

‘I have faith in you only, rather than in anyone else present here.’

Then he said, ‘You had such a big feast over there and I am staying so near. Yet you did not care to invite me?’ ‘It was not really a feast, Maharaj,’ I said. And then I explained the whole matter to him. Finally I added, ‘This monk here has, for nothing, reported to you against me. And you too expressed a grievance without enquiring from me what actually had happened.

Swamiji has said, ‘If anyone is at fault, call him and speak to him; don’t tell anything to anyone else.” But, Maharaj, you have acted differently.’

No sooner did I refer to Swamiji than Gangadhar Maharaj declared, ‘You have spoken rightly. It was my mistake.’ Saying this he pointed to the monk who had lodged the complaint and said, ‘This fellow has created all the rumpus.’ And everybody began to laugh.

Two things are to be marked in this episode: firstly, the profundity of Gangadhar Maharaj’s reverence and devotion to Swamiji; and secondly the trait of a great soul manifest in him – that is, acknowledging his mistake to a junior brother like me. None of us would have acted like that.

Then I said to him, ‘Maharaj, I have won the case. Now I will have to claim damages from you.’

‘All right, tell me what you want as damages.’

‘You have to pay a visit to the Advaita Ashrama. There you will have to take your lunch, take some rest, and then after having your afternoon tea, return before the evening.’

‘All right, I’ll go,’ Maharaj agreed. Thus, one day he came to the Advaita Ashrama in the morning and stayed on. But just after his lunch he said, ‘Now I shall leave.’ It was summer time. In those days there were no taxis as there are nowadays. The entire distance from Wellington Lane to Shyambazar he would have to cover by horse-cab. Realizing that it would be very hard for him to go in that scorching sun, I said, ‘The agreement was, Maharaj, that you would go back towards evening, after taking your afternoon tea here. You can’t possibly leave now.’ ‘No no, I must go right now,’ he said.

In order to hold him back, I felt compelled to say, ‘Maharaj, kindly stay on. If you do, I’ll feed you with a new thing you have never tasted before.’ ‘What new thing can you feed me, boy? I was the guest of so many kings and wealthy persons. I have travelled in so many lands, eaten many a variety of food. What new thing can you possibly give me to eat or drink?’

‘Whatever you may say, the thing I am going to offer you has surely never been tasted by you before.’

‘Well, let me see what you are going to give me. I am staying on.’

I felt much relieved thinking that, at all events I could at least stop his trip in this hot sun. As soon as it struck four, Maharaj called out to me, ‘Where is the new thing you promised? Bring it quick.’ After he had gone for his rest, I had prepared some coffee and kept it on ice to cool it. In those days, there were neither coffeehouses nor refrigerators in Kolkata. I offered him glassful of that cold coffee. He drank it and was very glad. He said, ‘Really, such a thing I had never tasted before.

3 thoughts on “Bespoken behind”