O! the year 2011! I bid you adieu as I watched the sun setting yesterday from standing by the side of the main dome of our Temple! It was absolutely scenic but fastest fleeting as I tried to catch the mood with my iPad…the rains came refreshingly  in a downpour!

I convey my love and best wishes and also of brother Swami Saradaprabhanandaji Maharaj to every one of you on this happy New Year Day! The officials from headquarters and devotees too join me in wishing you a happy New Year and Blessed Kalpataru day!

Why a New Year Day is important in our lives? Is the novelty of the coming year connected merely with the numbers on the calendar? Or is it something more than a mathematical event? Days after days, months after months and as the Time progresses, finally we wake up to a First Day of the next Year – calling it a New Year. This New Year Day, no doubt makes us feel happy. It brings lot of hopes. It fetches desires to fulfill many aspirations.

Undeniably, this New Year Day is eulogised as ‘Kalpataru Day’ in the Ramakrishna circle of devotees. Below are some excerpts from the Editorial that appeared in Vedanta Kesari of January 1987, throwing some light on the deeper significance of the historical event.

Swami Akhandananda writes, “It is an auspicious day for all of us. Our Master became the Kalpataru to bless his disciples at Cossipore (a Calcutta suburb). Kalpataru is one of the five trees of Heaven or Indra’s Paradise that is supposed to fulfil desires. The other four are Mandaram, Santanam, Harichandanam and Parijatam.”

May this Day train us and make us deserving to receive the boundless grace of the Master!

The first day of January, besides being the New Year day, is of special significance to a Ramakrishna-devotee. This is the day of the Self-revelation of the Great Master Sri Ramakrishna when he became, what is now popularly called, the Kalpataru `the wish-fulfilling tree.’

It happened in 1886 at Kasipur where the Master had been undergoing treatment for his throat cancer. On January 1st, he felt particularly better and came down from his room for a stroll on the spacious lawns of the garden-house. About thirty devotees were present and were scattered here and there in the garden. As soon as they saw the Master, they all came near him and bowed down. 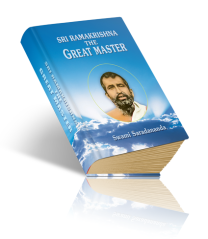 To Girish, the Master said, `Girish, what have you seen that makes you glorify me publicly before one and all?’ Girish at once fell at the Master’s feet and said with folded hands and choked voice, `What more can I say of Him, even a fraction of whose glory Vyasa and Valmiki miserably failed to express in their immortal epics and Puranas?’ Hearing these words of Girish, the Master was deeply charmed and his mind soared to a high plane. Seeing the divinely illumined countenance of the Master, Girish was thrilled and he cried out in great joy, `Glory unto Ramakrishna! Glory unto Ramakrishna!’ and began taking the dust of his feet again and again. The Master looked at all present and said smilingly, `What more shall 1 say to you? May you all be spiritually awakened!’ No sooner had he said these few words than he went into Samadhi. What followed is best described in the words of Swami Saradananda, in his magnum opus ‘Sri Ramakrishna – the Great Master’, who had seen the whole episode from a distance:

“When the devotees heard those words of blessings and protection from fear, they raised repeated cries of joy, exclaiming, `Glory to Ramakrishna.’ some of them saluted him, some showered flowers, some again came and touched his feet.”

The Master touched the devotees in that state of Samadhi and blessed them all. The effect was instantaneous.

How and when can this ‘Kalpataru‘ grace descend in our own life? True, divine grace is unconditional. Yet, in our heart of hearts, we do feel that without some sort of readiness to receive the grace, we make ourselves unfit for it.

That is the significance of the Kalpataru Day celebration on the 1st of January that is observed by the devotees of Ramakrishna.

It is a reminder to every devotee of the unforgettable event at Kasipur and of the redeeming power of the Lord. It is also a gentle hint to a serious spiritual aspirant to look beyond the physical aspect of the episode and to concentrate on its spiritual implications. It is in this sense that the bestowal of the `Kalpataru grace’ is as valid and true today as it was then. And it is to recapture that mood of participation in the inspiring event at Kasipur that the 1st of January holds a special meaning to a Ramakrishna devotee.