Enchanting eight day function
I have the honour to receive host of mails from devotees of different parts of the world enquiring how Sri Krishna Janmashtami celebrations were conducted by our Centre in South Africa. Thanks for their well-meant curiosity. I do take delight in expressing in detail an account on the Sri Krishnashtami celebrations here at our headquarters in Durban. There were Satsangs every evening from the first day to the last ashtami day i.e . for all eight days! Satsang here has a definite pattern.

First four days I had vocal rest, as, a week back I had a bad laryngitis. On fifth day morning I addressed Senior Citizens at our Phoenix sub-centre. The point of my address was that the idols or pictures are not to be viewed as mere stones or paper but as a manifestation of the One, supreme Divinity. In the evening I reached Verulam where in the Gopallaala temple I met devotees and spoke on Sri Krishna’s mercy. On the sixth day I had to travel to Stanger, a one-hour distance in the severe cold. There also the Gracious God was the theme. On the seventh day at our HQ Sri Ramakrishna Temple hall, I spoke on Sri Krishna and the Black Cobra. It was the story of poisonous Kaliya and how Sri Krishna tamed it and the spiritual import of this charming story.

On the eighth day, which was the last auspicious ashtami evening, my theme for the discussion was the Divine birth of the Unborn. We had two sessions. In the first session the theory of Incarnation was dealt with. And in the second session the secret of the Unborn Supreme God appearing as baby Krishna to Devaki and Vasudeva was explained.

Brother Saradaprabhananda this year went to Chatsworth branch and gave discourses there for all eight days on the significance of the Fourth chapter of the Bhagavad Gita. The first six evening Satsangs at HQ were addressed by our Youth members. I was witness to their speeches. On hearing them speak with confidence, I joined others in the audience in appreciating them for the research they had done on different themes and how they, in simple form, placed the ideas before the public. 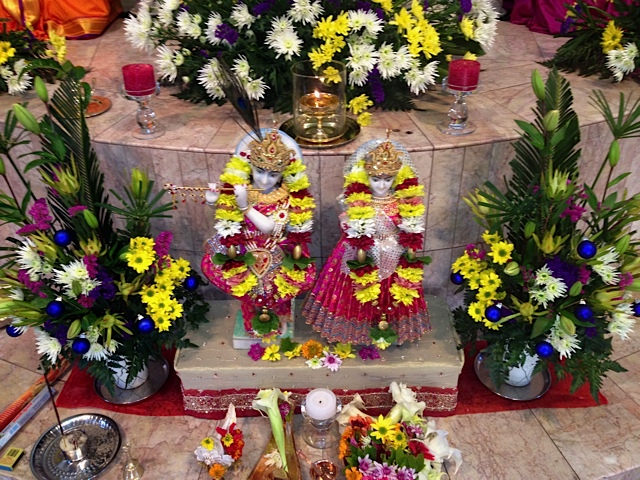 Every evening of the Krishnashtami celebration, Satsang attracted a large number of devotees. There were lot of bhajans and kirtans till the end of the program. Selected passages from Srimad Bhagavad Gita were sung to the traditional tunes every evening satsang. The temple was beautifully decorated. The yugal murti Sri Radha-Krishna bedecked with finery and ornaments dazzled every one. At the stroke of midnight 12, the baby Krishna in a beautiful cradle was brought out to the audience. Finally with arati to Sri Radha-Krishna and offering of flower and rocking the cradle by every assembled devotee the solemn program came to an end with distribution of prasad.

The devotion of the devotees is worth noting; what a verve and vigour in singing bhajans! And faith and fervour in performing worship! And the day-long fasting and sitting in the temple for such long hours – absolutely maintaining utmost discipline – no chitchat, no gossip and all are tuned to the discourse and songs.

10 thoughts on “Remembering the redeemer”