One coast to the Other

It’s indeed a privilege for our Centre to welcome one of our senior monks of the world-wide Ramakrishna Order today. The Saturday evening Satsang tomorrow would aptly provide an opportunity to extend our warm traditional welcome to the visiting Swami. He is most Revered Swami Gautamanandaji maharaj. The occasion is the 150th Birth Anniversary celebration of Swami Vivekananda in this rainbow nation.

He has come on a 9-day visit to South Africa. He is presently one of the Trustees of the Ramakrishna Math & Ramakrishna Mission and also holds the position of President of Sri Ramakrishna Math, Chennai. In Durban airport this evening he was heartily welcomed by brother Saradaprabhananda, officials and Self. He is accompanied by Swami Atmajnananadaji maharaj who is Secretary to the visiting Swami. They are scheduled to return on the 17th by the afternoon flight to Chennai.

Swami Gautamanandaji joined the Ramakrishna Movement in 1951 and received his early spiritual training under Swami Ranganathanandaji and was ordained as a monk in 1966 by Swami Vireshwaranandaji, the tenth President of the Order.

The Swami worked among the tribal and rural people of Arunachal Pradesh and Madhya Pradesh for 20 years vigorously promoting value-based education. He served as the General and Executive Member of the Central Board of Secondary Education and the National Council for Educational Research and Training, New Delhi, the two major National bodies of the Government of India.

The Swami has organised extensive relief operations in India and is an expert in India’s cultural heritage.  He has lectured extensively both in India and abroad in the East and West to spread the universal message of Sri Ramakrishna in the light of Neo-Vedanta. He is proficient in English, Sanskrit, Hindi, Kannada, Tamil and Bengali. He is highly regarded for his thought-provoking lectures and has also contributed a number of articles to leading journals.

In 2011, Swami Gautamanandaji was authorised to give spiritual initiation to devotees in India. This is his second trip to South Africa at the invitation of the Ramakrishna Centre. 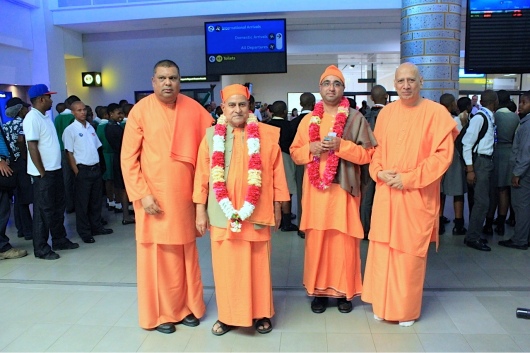 The 150th Jayanti of Swami Brahmanandaji

The 150th jayanti of Swami Brahmanandaji falls this year on the 12th of this month. Since on that date, several of our centres in India and abroad have scheduled a celebration, we felt that it would be beneficial for the devotees to listen to the visiting Swami on the spiritual teachings of Brahmanandaji. It is pertinent to note here that the visiting Swami is a disciple of Swami Yatishwaranandaji. Swami Yatishwaranandaji was a well-known monk for his erudition and higher spiritual living. His pioneering Vedanta work in Europe is still remembered. He was one of the disciples of Swami Brahmanandaji.

Swami Gautamanandaji would be travelling to our branches that are located in Ladysmith, Phoenix and Johannesburg. He will be also making a visit to Sri Sarada Devi Ashram at Asherville in Durban on Monday, the 11th instant. He will be specially interviewed by Smt Veena Lutchman in the Lotus Radio from 5 to 6 pm on Sunday, 10th instant during the Hindu popular program ‘Bhakti Sangeet’. This will be broadcast all over the country.

His public lectures have indeed interesting topics. A list is given below for your information and dear reader, if you are anywhere near the place of our branch centres, I urge you to attend the programs and do not miss the radio interview too!