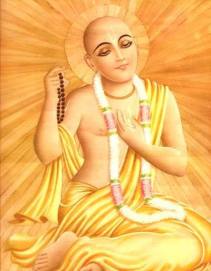 The 614th Birthday of Sri Chaitanya Deva was celebrated at Eire Vedanta Society (EVS) on Dol Jatra day which fell on Thursday 21st March 2019. A beautiful picture of Sri Chaitanya Deva holding a rosary signifying chanting of Sri Krishna’s holy name was kept at the altar for the first time. Devotees brought suitable offerings which were distributed as Prasad to all. 22 people attended the function.

Swami Purnananda performed the vesper service to Sri Ramakrishna amidst singing of “Khandana…” by the Ramakrishna Choir led by Jhuma Majumdar. While Prithwish Majumdar played the Tabla, Hariharan accompanied on Kanjira.

The evening was a moment of great joy when devotees enthusiastically sang a myriad of Sri Krishna bhajans. A few bhajans were led by Sharanya Bharathwaj and Malabika Basu.

Swami Vimokshananda, in his discourse on the Life and Teachings of Sri Chaitanya Deva,  traced the incident of his being given an uncommon name after his birth and how even at the young age he renounced name and fame just for his older friend Raghunath by throwing away all his superb writings on Logic in the Ganges.

Swami Vimokshananda also retold the story of Jagai and Madhai and how these two bad elements of society completely turned over a new leaf as servants of society through the holy company of Sri Chaitanya. Chaitanya‘s infinite compassion healed a leper. His untiring travels to South of India spread the Maha mantra among all classes of people irrespective of caste or creed. He brought millions of people into his bhakti fold.

Later they prostrated to both the monks of the EVS offered Abir.

A few snaps of the function here below in a slideshow: