With the chanting of this auspicious Ganesha mantra, Swami Vimokshananda, the Minister in Charge of the Ramakrishna Vedanta Centre, Dublin began his Discourse at the Vinayaka Chaturthi Festival held at the Limerick town, about 180 kms south-west of Dublin. The Hindu groups of Limerick came together to celebrate the Chaturthi event grandly on Sunday, 15th Sept 2019.

The images of Ganesha and the mother Gauri were brought specially for this purpose from India by Mohan, one of the Limerick residents. He is the principal devotee who gathered the community and arranged this festival that was attended by more than 180 devoted people. The hall was almost full with elders and children in their variety garments indicated the joyous moment.

A recently married young couple from Karnataka was selected to do the puja rituals. Swami Vimokshananda was the tantra-dharaka of this puja, directing them to perform the rituals and chanting the mantras suitable to every act of propitiation. He explained the purport of this puja initially and went on giving an English rendering of the ritual practices. At the close of the Puja, the audience repeated with him the 108 names of Lord Ganesha in one voice. That created a wonderful vibration. The assembled devotees then gave the pushpanjali one by one. 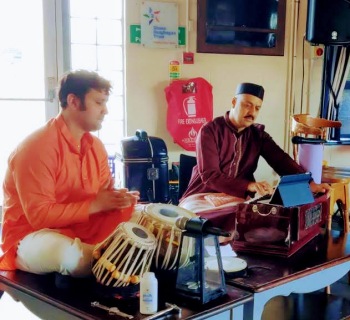 In his Talks, the Swami described the importance of puja in one’s spiritual life and how the puja transforms the concept of God from God outside to God within. Dattareya Valenkar, a close devotee from Bengaluru who was on a visit to Ireland as a guest of the Vedanta Society, Dublin was present. He is a popular Hindustani Classical music vocalist.

He sang Ganesha bhajans in Hindi, Marathi and Kannada languages to the delight of the audience. The vocalist was aptly accompanied on Tabla by Rupak Pandit from Dublin.

The event concluded with sumptuous lunch prasad. The musician and the Tabla player were duly honoured with gifts by the Limerick Hindu community.

6 thoughts on “Lambodara in Limerick”