Here is a short Report on the First nine days (21st to 29th May) of a memorable visit of one of the Vice-Presidents of the world-wide Ramakrishna Order, Sri Swami Smarananandaji Maharaj. His arrival – second time in South Africa – saw a surge of joy and enthusiasm among the devotees here. His previous visit in 2002 was in his capacity as the General Secretary of the Ramakrishna Order. He reached Durban from Mumbai on 21st May, 2008.

On arrival he, along with his monastic assistant Swami Jnanavratananda, was given a warm and traditional welcome reception at our Temple Hall in the evening. In his Address of Reply, Swami Smarananandaji pointed out the deeper link of this SA Centre with Belur Math and how the continued relationship would be a potent factor in bringing peace and happiness to the people of South Africa. 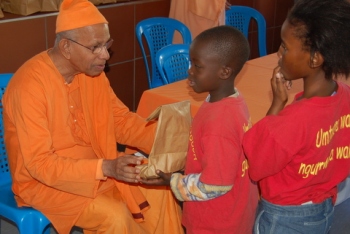 Next day in the morning he was taken to Ramakrishna Abalindi Home at Inanda where he met African people among whom hampers were distributed. Later in the evening he was met by distinguished dignitaries of Durban.

On Friday, 23rd May, Most Revered Vice-President Maharaj addressed a gathering of devotees at our Chatsworth Sub-Centre. He explained the advent of Bhagawan Sri Ramakrishna as a necessity to bring people of all faiths together. On 24th he visited the Ramakrishna Ethembeni Home at Kwa Mashu where he met orphans among whom a few children were affected by HIV/AIDS. In the evening he was given a public reception at our Nischalananda Hall where more than 600 people of all walks of life attended. There was also a cultural programme of Kathak dance recital by the famous Manesh Maharaj.

On Monday evening the Vice-President Maharaj addressed a gathering of devotees at our Redhill Satsang Group on the cultivation of devotion to Holy Mother. 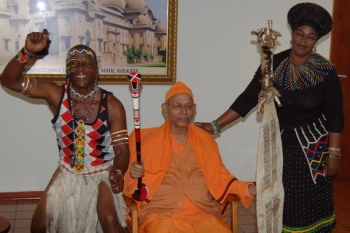 On Tuesday morning, Most Revered Vice-President Maharaj gave initiation (mantra diksha) to 109 devotees at our Temple. In the evening at the Temple Hall he gave a scholarly discourse to the devotees on Srimad Bhagavad Gita and its day-to-day utility. Wednesday was spent on granting interviews to the spiritual aspirants. He and his monastic assistant Swami Jnanavratananda were taken round of the beautiful Botanic gardens in Durban where they enjoyed the varieties of plants and trees including the water birds.

On 29th that is on Thursday, Most Revered Vice-President Maharaj blessed 98 devotees with initiation (mantra diksha). Thus in South Africa he has initiated 208 devotees with spiritual guidance. Earlier on Sunday morning, Most Revered Vice-President Maharaj inaugurated the Ramakrishna Shrine at our Phoenix Sub-Centre which was attended by more than a thousand people. A special puja was performed by Swami Saradananda on that auspicious occasion. On Friday morning he and his team left for Northern Natal tour.