Sri Swami Smarananandaji Maharaj, one of the Vice-Presidents of the world-wide Ramakrishna Order completed his South African tour on 4th June, 2008. He and his Secretary Swami Jnanavratanandaji left Durban on 5th June morning by a homeward bound SA flight to Mumbai and onto Kolkata. Here is a short Report on his memorable visit – the Last Six days (30th May to 4th June) in South Africa. The holy visit brought about a remarkable enthusiasm among the Ramakrishna devotees and Hindus in general. The spiritual atmosphere was palpable wherever he went. Many sincere spiritual seekers got his invaluable guidance. 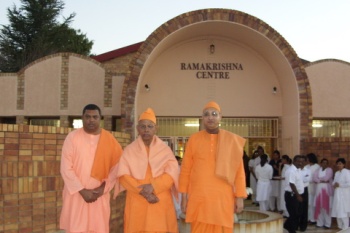 The morning of 30th May saw the departure for Northern Natal centres. The team – consisting Most Revered Vice-President Maharaj accompanied by Swami Jnanavratanandaji, Swami Saradanandaji, Dr H B Parbhoo, Dr Seebaran and Bhavanesh – arrived at Newcastle by 1 pm. In the evening a special Satsang was arranged in the Centre’s Shrine where to the packed hall, Swami Smarananandaji Maharaj spoke on ‘Peace in Daily Life’. Next day morning after breakfast, the team drove to Ladysmith where the poor children of Ramakrishna Quedisisi Crèche, situated in the Black Settlement Area warmly greeted Revered Maharaj. He distributed packets of breads, biscuits, cakes and juices along with writing materials among the children.

At 11 am he reached a School premises where more than 500 indigent Black/Indian people gathered. He gave away the hampers and also spoke a few words of consolation first in English and then for a few minutes spoke, to the delight of the aged people assembled there in Tamil and Hindi. In the evening, he visited the Ladysmith Sub-centre and prostrated at the beautiful shrine before the Holy Trio. He met devotees and also the newly initiated disciples and gave them spiritual guidance.

On 1st June, a public Reception Programme had been arranged by the Ladysmith Sub-centre in the famous 115-year old stately Town Hall where Revered Maharaj spoke on ‘Contemplation in Active Life’. The centre’s children-devotees presented an interesting folk dance item. 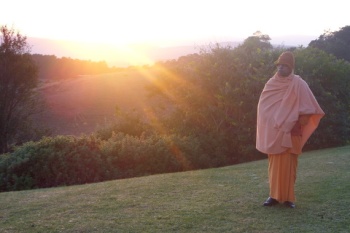 In the evening, he with Jnanavratanandaji left Ladysmith and reached Ramesh Ishwarlaal’s Retreat Home at Drakensberg. The assembled devotees had meditation and Readings from The Gospel of Sri Ramakrishna. 2nd June was spent on discussion on Upanishads, Conversations of Holy Mother and Meditation. In the day time Revered Maharaj and the devotee team went to see the Bird Show in Drakensberg where the well-trained birds like vultures, falcons, owls and also dogs performed to the delight of tourists.

On 3rd June, Revered Maharaj and the team while returning stopped for an hour at Pietermaritzburg Sub centre. In this beautiful shrine Revered Maharaj was received with arati and traditional welcome with garlands. While speaking to the devotees there he paid homage to Swamis Nischalanandaji and Shivapadanandaji for their endless efforts in spreading ‘Ramakrishna thoughts’ among the public. He added that Ramakrishna has become a ‘permanent citizen’ of this country.

Reaching Durban back at the headquarters centre, he went to Sri Sarada Devi Ashram located at Asherville in the evening. He was accorded a warm reception by Pravrajika Ishtaprana and other nuns and women devotees. He spoke in the beautiful shrine on ‘Katha Upanishad’ underlying the prominent ideas chapter-wise.

There was no outing on the 4th June which was the last day in his itinery. The day of course saw numerous devotees having darshan as well as receiving spiritual guidance from the Most Revered Vice-President Maharaj. His visit will ever remain etched strong in our memories as it gave enormous opportunity for all of us to see, walk and laugh too, besides drawing inspiration in our onward spiritual journey.