There are many devotees who seek spiritual guidance through email messages. Some problems are quite tricky in the sense that they are not easily given to satisfactory solutions. Many of the doubts arise, in some cases, due to their inability to understand what their Gurus have instructed. That is why it is always better to keep in the habit of studying the Gospel of Sri Ramakrishna, books on Holy Mother and Swamiji so that our minds are freed from doubts, further strengthened and fortified with renewed enthusiasm.

One lady devotee wrote to me the other day that her in-laws and husband maintain antipathy to everything connected with the Ramakrishna sangha and their attitude actually hurts her in such a bad way that she was unable even to make visits to Belur Math.

She said that “ …Whatever they are, they are not my problem. Almost four years ago very luckily I’ve got mantra from Sri Sri Swami Gahanananda Maharajji; before having any children I didn’t have any problem to manage time for japa and dhyana. But now the situation is that I’m a mother of two little kids – one is three and half year old and the other is one and half year old.

Now after trying a lot I’m continuously failing to take out any time for japa-dhyana except the bed time. Before going to bed at night and before leaving the bed at morning I try to make it regularly and during daytime work, I try to continue the japa in my mind. But I don’t know why this is making me very restless and I’m feeling very guilty that I’m not following my GURU’s path. Can you please tell me what should I do?”

Yes, one side unsupportive family and the other side the pressing need to take care of the family. Finding not much time, though they are earnest, and with the ever-present criticism against such spiritual practices, they feel despondent. Those devotees who have got this type of situation go through silent sufferings as their conscience prick them in what they consider as ‘neglect’ of their spiritual responsibilities.

The following was my reply to this devotee A.

…..Though it is unfortunate to learn that the related in-laws’ mental vibrations are not aligning with yours specially with regard to our Thakur, Ma and Swamiji, I dont consider that as an ‘obstruction’ to your spiritual life. Only Master knows why you have stepped into ‘their’ family. It is a two-way learning process : for you to become more intensified i.e., strongly resolved in spite of indifference and to them : to become more aware of your ‘bhakti’ as an example. I am happy that you however, are not unduly disturbed by that and you are carrying your sadhana with full faith.

By Sri Thakur’s grace you have obtained a wonderful Guru in Srimat Swami Gahnanandaji Maharaj. You might have read in my blog my memories about the abiding guidance that I personally received from him. So, I consider you as most fortunate. 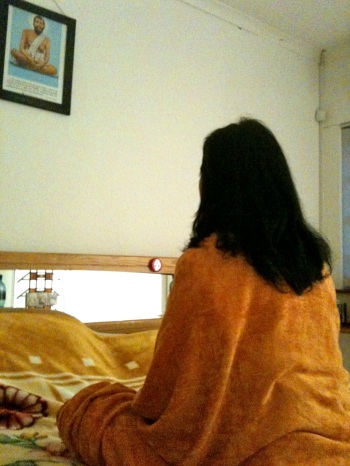 Coming to your specific problem of feeling guilty over not being able to follow Guru’s instructions, I have to say that your feeling is misplaced. Revered Maharaj used to tell all his disciples after initiation that they should try to always be aware of the presence of Sri Ramakrishna in their hearts and repeat the mantra mentally while doing their works as far as possible. In many cases, while replying to questions of persons in situation of predicament, Revered Maharaj used to instruct them to get up a little early, before the hassles of daily life start, to do their japam. When there is no separate space for worship, even on the bed after putting a clean bedcover. Many people do not get free time in the evening. In their cases Revered Maharaj used to prescribe the time before bed when one had finished all his/her daily responsibilities.

I think A…, you are following Guru’s advice only but unknowingly. After all, it is said that a Guru looks after his disciple’s welfare and guides him/her even when he is not physically present. I am sure by His grace your doubts would be dispelled. Continue doing your japa before going to bed at night and before leaving the bed at morning. Yes, Try to make it regularly. And during daytime work, continue with your mental japa.

My prayers are with you. I have no doubt that Sri Sri Thakur is ever gracious in taking you by his hand in your spiritual path…..

After a few days I got a response from her thus:

…Your reply has given me a great relief. I was really confused about my daily routines. My kids totally depend on me, I can’t deny that responsibility but on the other hand I should not fail to follow GURU MAHARAJ JI’s instructions. After your kind response I can feel it that may be, Guru Maharaj is not physically present but He is continuously with me and He is driving my way of life, otherwise how could I unknowingly managed to follow his instructions? Now I am happy and almost sure I will acquire the Kripa of Thakur, Maa & Swamiji only because of it that my GURU is with me…

18 thoughts on “Trial and Time”