The first Children’s Cultural Festival (CCF) that I saw in Durban was in 2007, three months after I was posted to South Africa. I had attended earlier many such functions in India and had come to the conclusion that too long hours was too much to be my treat. Imagine the severity of the sting of sitting for seven hours! But here the situation was smartly different. I didn’t know how the time went by and it appeared only a few moments had just passed and I was jolted to understand that the function had come to an end!

The all-pervading spirit of Sri Ramakrishna could palpably be felt in all the children who were participating in various items. There were scintillating sketches, trend-setting talks, soulful singing and delightful dances. The quick succession of multi-items moving from one scene to the other on the beautifully decorated stage was indeed mesmerizing. Suffice it to say that I was captivated by the love and devotion the children displayed towards our Holy Trio.

In this connection I saw the tireless efforts of the teacher-devotees who started preparing the children during the vacation. They are verily like the unseen and unsung dew drops which in the small hours of the day fall silently on the buds and make them bloom so that the fragrance can be spread. And of course I cannot forget the devotee-officials who worked hard in arranging the logistics without which the completion of the Festival would not be in order.

From brother Swami Saradaprabhanandaji and also some of the senior devotees what I hear about the Cultural Festival sounds wonderful. How in those days this Festival would be called ‘Rally’! All the children of the ‘Ramakrishna Children’s Club’ would meet at an Annual Mass Rally. This term ‘Rally’ even today, is used when referred to in elders’ conversations. In years gone by the children with their youth siblings along with elders would assemble in a pre-selected spot and would make a procession through the streets of Durban in the early morning. You can see a few photos of old days by clicking the below links:

Who knows you may be marching in one of the photos as a little boy or girl ?!

In their march past, the children would give a ‘wake-up call’ to every Hindu who was ‘asleep’ to his pristine culture (pun intended) with band parties that wielded drum majorettes, bugles, whistles. I further understand that the now ubiquitous vuvuzelas were conspicuous by their absence!

The ingenuity of late Revered Swami Nischalanandaji in organizing ‘Rally’ to awaken the Hindu population to its great glorious past through the medium of children was indeed very productive in that the sustenance of Hindu culture in this country amidst entirely a different variety of culture was made possible. 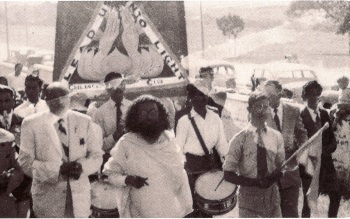 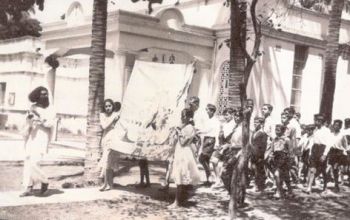 The old theme of ‘procession’ oriented Festival has in a few years metamorphosed into a stable program, taking from the diverse aspects of the preserved culture to play a role of ‘nation-building, character-making’ among the rising level of modern participation.

Today I am attending the Southern Natal CCF. (Northern Natal branches have their own Cultural Festival day. Earlier once I did write about the 2009 Northern Natal CCF.) The following branches are scheduled to perform: Chatsworth, Durban Central, Etete, Phoenix, Pietermaritzburg, Redhill, Richards Bay, Sydenham, Tongaat, Verulam and Sri Sarada Devi Ashram. I shall try to post the photos later which you may enjoy watching as a slide show.

I take this opportunity of wishing all participating branches every success in their various items. My following Message finds a place in a printed program published on the eve of the CCF, to be handed over to more than a thousand people who have started to throng the venue :

My dear children, parents and well-wishers,

This Children’s Cultural Festival now held in its 56th year is undoubtedly one of the great contributions of late Swami Nischalanandaji Maharaj, the Founder of the Ramakrishna Centre of South Africa. My humble prostrations to him. Propagation and preservation of Hinduism suitable to the Hindu masses and more importantly spreading the non-sectarian and broad-based teachings of Bhagavan Sri Ramakrishna, Holy Mother Sri Sarada Devi and Swami Vivekananda among the people living in South Africa was the goal he set before himself and he worked tirelessly to that end.

On this joyful occasion, Swami Saradaprabhanandaji  joins me in conveying our heartiest congratulations to all our children for their brilliant performance seen year by year. Notwithstanding the severe school homework and stressful projects, they have put in strenuous rehearsals of their allotted items. This is indeed a commendable achievement. Our  hearty appreciation is due to the unseen hands – especially the voluntary teachers and the the respective branch Committee members – that worked unselfishly “behind the scenes”.

What actually do we aim to achieve by holding the Children’s Cultural Festival?

– an awareness to increase the quality of life

– inculcating faith in God, the One Supreme Power

Though the number of children participating in our Sunday Schools have to our delight, seen a rise in recent years, yet we are painfully aware that vast majority is still remaining untouched. In this respect, the role of parents in coming forward to enrol their children cannot be over emphasized. Neglect by the parents, being the First Teachers of their children, will portend to the perils of the future family system. A happy family is the core unit of peaceful society. Home is definitely the first school.

I, therefore, earnestly urge parents to encourage their children to enlist them in the classes so that these innocent children do not become prey to modern ills. A wholesome, nourishing spiritual food given when they are young will be the source of strength in future when they will be able to face the newer challenges.

May the blessings of the Holy Trio be on all is our  prayer!