Today is Vijaya dashami. My hearty and happy Shubha Vijaya Greetings to every one of you. Brother Saradaprabhanandaji, officials and devotees join me in wishing Mother’s blessings to all. 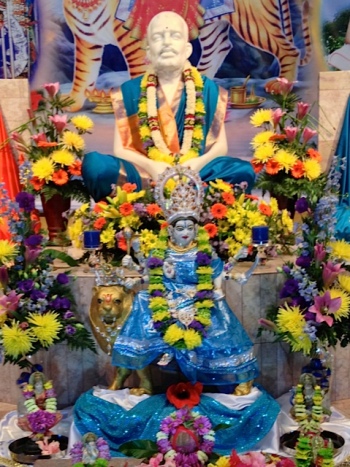 Here Navaratri was celebrated in all its solemnity. Everywhere i.e., in all our branches, the devotees assembled in large numbers. Three of our centres i.e. HQ, Chatsworth and Pietermaritzburg had, of course did the navaratri function with Sri Sri Durga’s benign form without the demon Mahishasur in murti (3 ft height). These clay images were prepared locally by a lady devotee.

My first Talk during Navaratri function was at Phoenix Sub-centre. There, more than 500 senior citizens were present to whom I narrated the glory of Goddess Durga. On the same evening, I had the opportunity to visit our Chatsworth branch where I was blessed to speak on “Saptashloki Durga”. The second day took me to Pietermaritzburg and in our Sub-centre there I dealt with the same topic. On the third day I was in Estcourt where I attended the Satsang at Maha Gayatri Mandir. The temple was packed to its capacity, attended by almost all Hindu groups. There I spoke on the three functions of the Divine Mother viz., the projection, sustenance, and dissolution.

On the fourth day, of course on my return, I stopped at Pietermaritzburg to attend the grand function organised by PMB Sanatan Ved Dharam Sabha. Here more than 300 people participated. My subject of Talk was on the “Three Aspects of Sri Durga” namely Mahakali, Mahalakshmi and Mahasaraswati. I spent my Fifth and sixth days in performing morning puja and attending the evening satsangs at Durban HQ and quietly listening to different speakers. On the 7th day at the same Satsang, I took up again explaining the “Saptashloki Durga” verses. On the 8th evening I was invited by Redcliff Hindu Temple where again I spoke on the glory of Goddess Durga. On 9th evening which is Vijaya Dashami day, the topic “Significance of Vijaya Dashami” was dealt with. 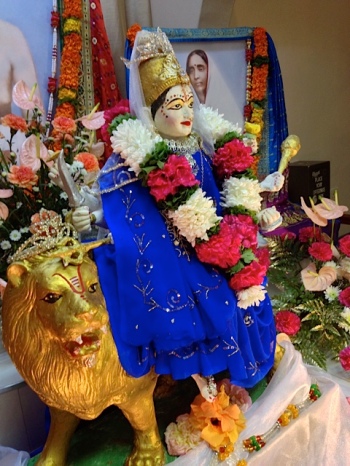 In all this running about and stating the events with lots of “I” (which perhaps not pleasing to read), what was the feeling in the core of my heart? That She, the Divine Mother has been acting, directing and instructing and making me a worthy instrument in Her hands. I was ever praying that this blissful mood may continue.

On Mahashtami day, after Master’s puja (that included the Kalash puja, Ganesha puja and Jai Durga’s puja) at the Temple, we gathered at the Nischalananda Hall where Sri Durga Havan was performed to the chanting of entire Devi Mahatmyam. The Chamunda mantra was recited 108 times by all the assembled in unison at every oblation of vilva leaf into the sacrificial fire.

The tradition of observing Navaratri here among the Hindus is a mixture of North-South combination. Our Centre follows the mainstream practice and hence the Bengal type Durga puja is not yet inroduced. Thus the first three days were dedicated to Mahakali, next 3 days to Mahalakshmi and the last 3 days to Mahasaraswati. The 10th day is of course Dasserah or Vijaya dashami when Mother Saraswati is invoked. This year we had only 8 days as the 2nd and 3rd tithi fell on the second day itself. It is to be noted that throughout the Navaratri days we had everyday Satsang in the evening. On the Vijaya dashami day the sky was partly clouded, not windy and one by one the murtis, after the farewell puja at the sea beach, were immersed in the surging waters. On that day when the murti was taken out for immersion, Saraswati’s picture was kept. 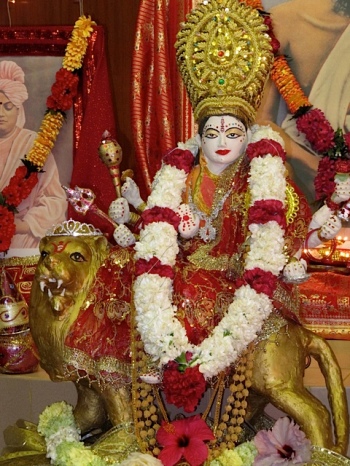 All the days were spent in a blissful mood for which we are grateful to our Sri Thakur, Ma and Swamiji. And this feeling of joy is nonetheless due to the gracious blessings of all senior monks and loving vibrations from the younger brothers all over the globe.

During the Navaratri we all read portions from Devi Mahatmyam. This is an authoritative scripture on the Mother worship. Many devotees though read it with all faith and devotion want to know what the story in brief is. Reading the English translation of the Sanskrit verses “as it is” would probably drown a person in extreme details and hence would lose the thread of the story. Here comes the importance of having a neat narration without the complexities of descriptions so that at one glance, the reader who is not conversant with Indian vernaculars gets the core teaching of this marvellous scripture.

I have no hesitation to point out that recently our devotee-brother Kissoon Behari sent me one such rendition that I was greatly elated at his attempt to put the prose in as simple terms as ever and understandable by even a child. I believe that the readers of this blog would surely find this not only interesting but also enlightening.

I shall proceed to post in continuation, Section-wise with the spiritual import behind each Section. The latter is added in order to encourage readers thinking in philosophical terms. What is given here is obviously the interpretation of the author and I am, as also you too are, aware that many more interpretations are available and many may come in the future. The 2nd instalment is scheduled to appear in this blog on the 31st October and the final, the 3rd instalment on 7th November 2012.

Rsi Markandeya tells his disciple how, by the grace of Mahamaya, Savarni, the son of Surya, became the eighth manu. He recounts the story of the king Suratha and a merchant named Samadhi.

King Suratha was a good king who treated his subjects well and protected his kingdom. When he was defeated by his enemies and betrayed by his own wicked ministers who had made themselves powerful in his absence, he left his kingdom and went into the forest. Here, he met a merchant Samadhi whose wicked wife and greedy sons had taken all his wealth and cast him away.

They both went to the beautiful hermitage of the Rsi Medhas. Although they were in the company of a great sage, the two men had no peace of mind.

The king presented their problem to the Sage: Without the control of his intellect, he was afflicted with sorrow. How was it that though he had lost his kingdom, he still had an attachment to all his royal trappings? And how was it that though the merchant had been cast out by his family and servants, he still felt unreasonable affection towards them?

The sage explained that not only ordinary men but even the wise are hurled into the whirlpool of attachment by Mahamaya. However, when She is propitiated, She becomes gracious and then She bestows material prosperity and success as well as devotion and spiritual knowledge, enlightenment and liberation. She is the Yoganidra of Lord Visnu.

When the two men became eager to know about the Devi or Mahamaya, the Sage unfolded to them the Glory of the Divine Mother by first narrating the story of Madhu and Kaitabha. (And then the stories of Mahishasura, followed by that of Shumbha and Nishumbha, in the second and third sections respectively.) 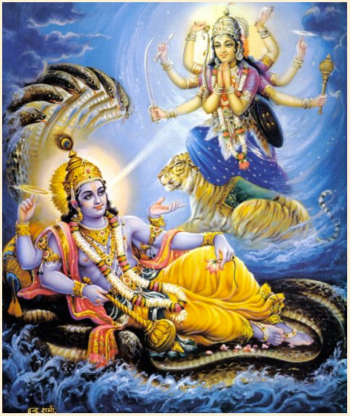 The slaying of MADHU and KAITABHA

Before creation, Lord Vishnu lay in mystic sleep. Lord Brahma, the Creator, sprang forth from the navel of the Lord. At the same time, two terrible demons, Madhu and Kaitabha, emerged from the wax of the Lord’s ears. They at once set out to kill Lord Brahma. Seeing that there was no help from the sleeping Lord, he sang a hymn to Mahamaya, now in the form of Yoganidra or sleep, covering the Lord. This hymn is called the ‘Tantrika Ratri Sukta’, or simply ‘Brahma Stutih’.

The Divine Mother was pleased, and withdrew Herself from the Lord who fought the demons for five thousand years with his bare hands. Then Mahamaya deluded the demons. They stopped fighting and in their arrogance they offered a boon to the Lord. He asked that they be slain by him at once. Trying to get out of their own trap, they asked to be slain where there is no water. The Lord placed them on his loins and severed their heads with his discus.

The myths are allegorical, for the external conflicts represent our own internal conflicts. The demons are our own impulses in search of earthly and heavenly power and pleasures.

SECTION ONE / CHAPTER ONE

1 Lord Brahma as well as Madhu and Kaitabha are born from the Lord. Good and evil, creation and destruction – all have their source in the one God. God Himself, of course, is beyond these pairs of opposites.

Lord Brahma’s appeal to the Mother comes in the face of utter desperation. So, too, should be the pleas and prayers of the devotees. The devotee who surrenders to the Mother and appeals earnestly receives help.

3 To face the difficulties of the world, one needs a spiritual guide. Faith and devotion arise in the devotee. One becomes aware of a Higher Power. Suratha and Samadhi find Rsi Medhas who becomes their Spiritual Guide and shows them the way to final liberation.