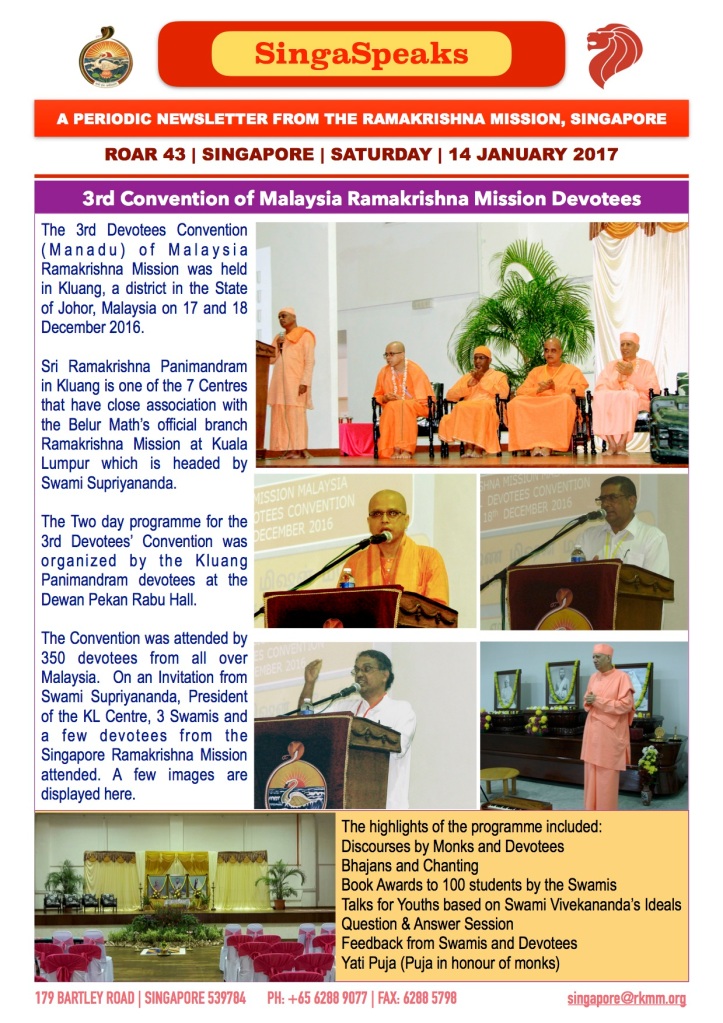 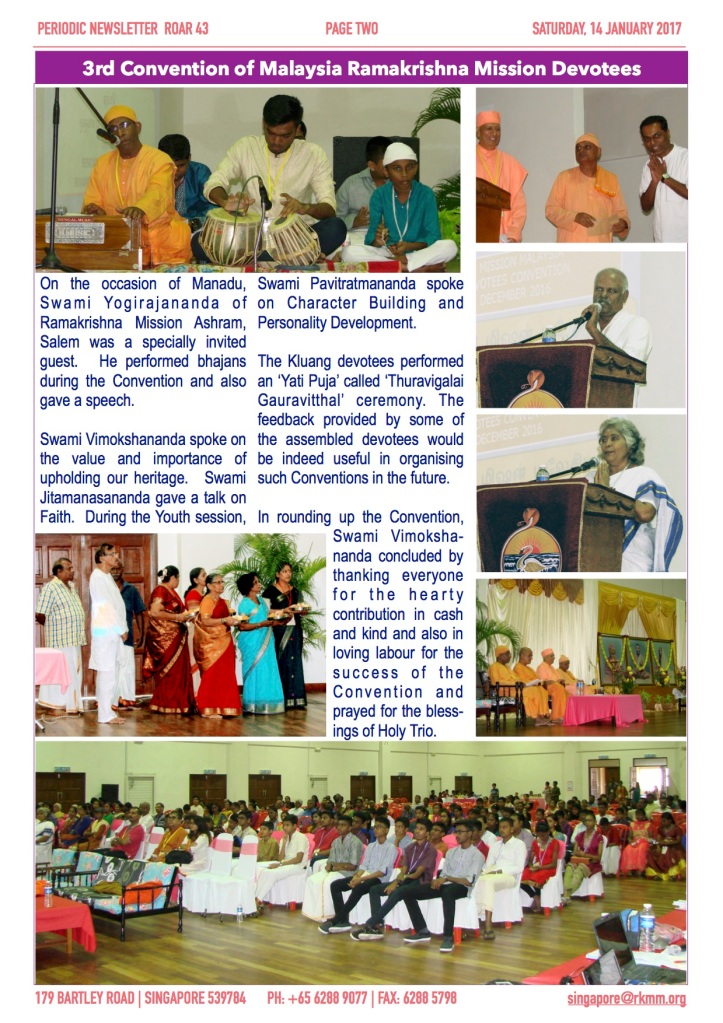 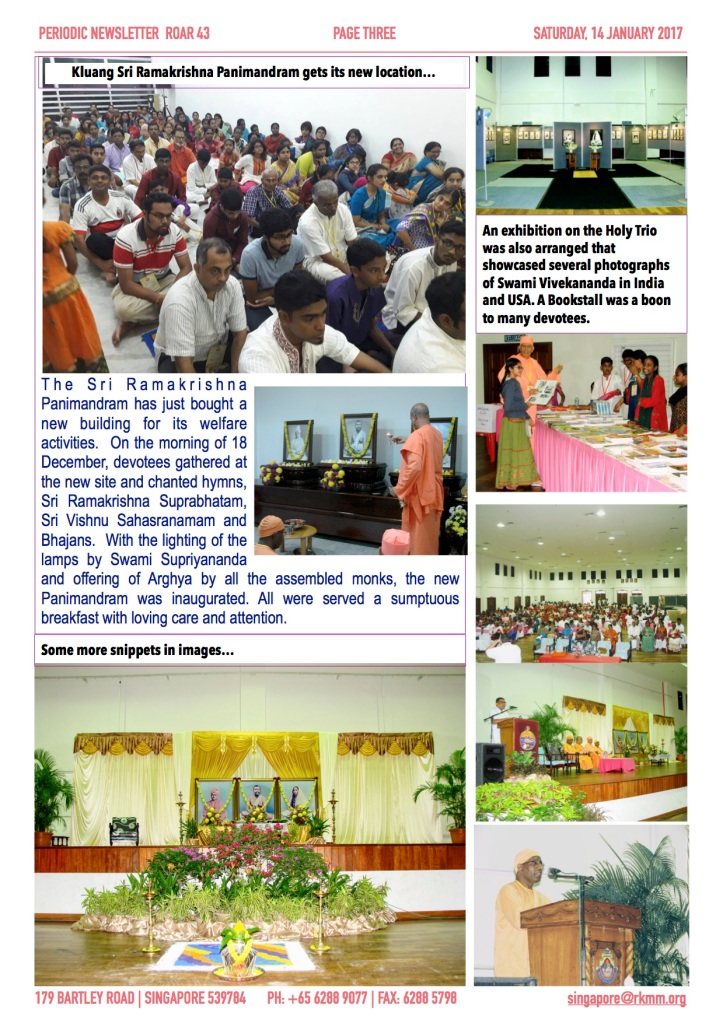 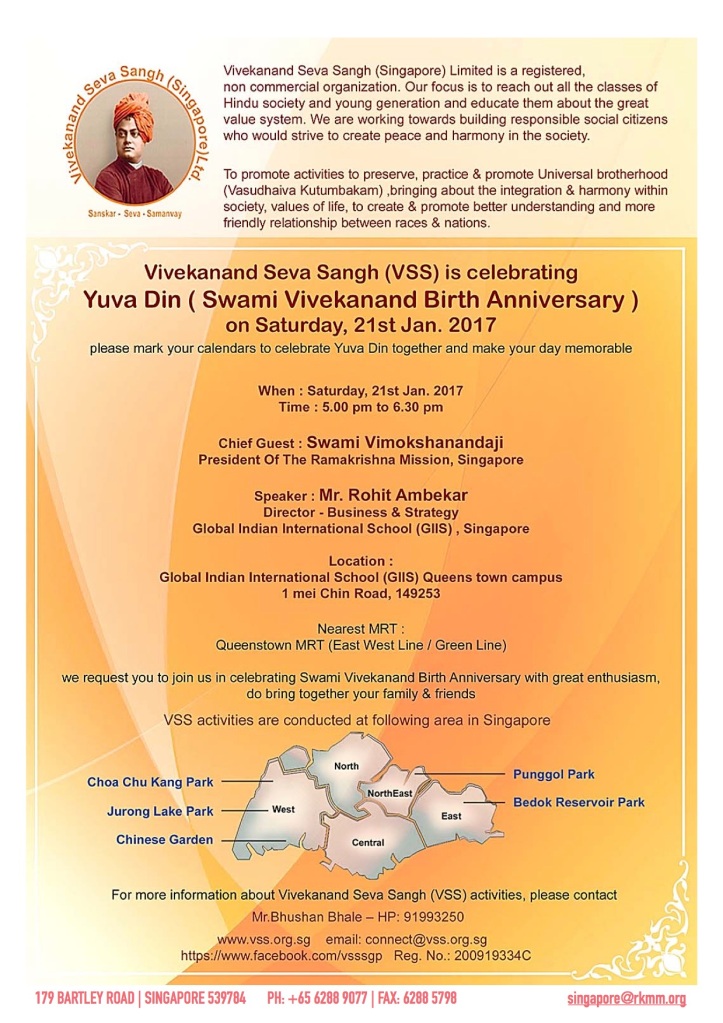 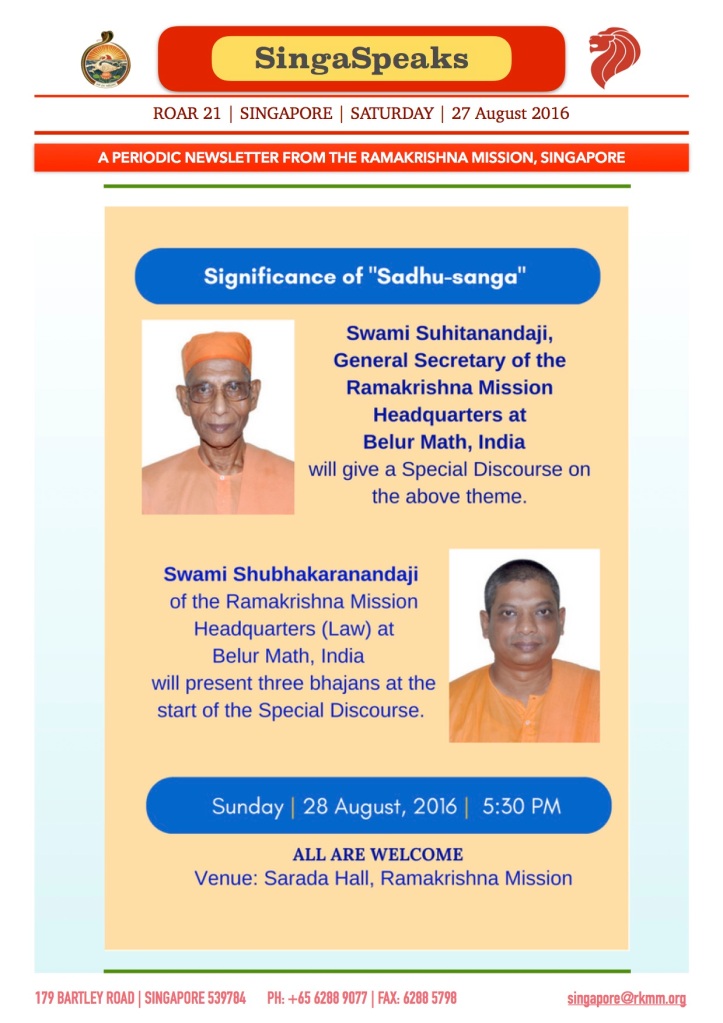 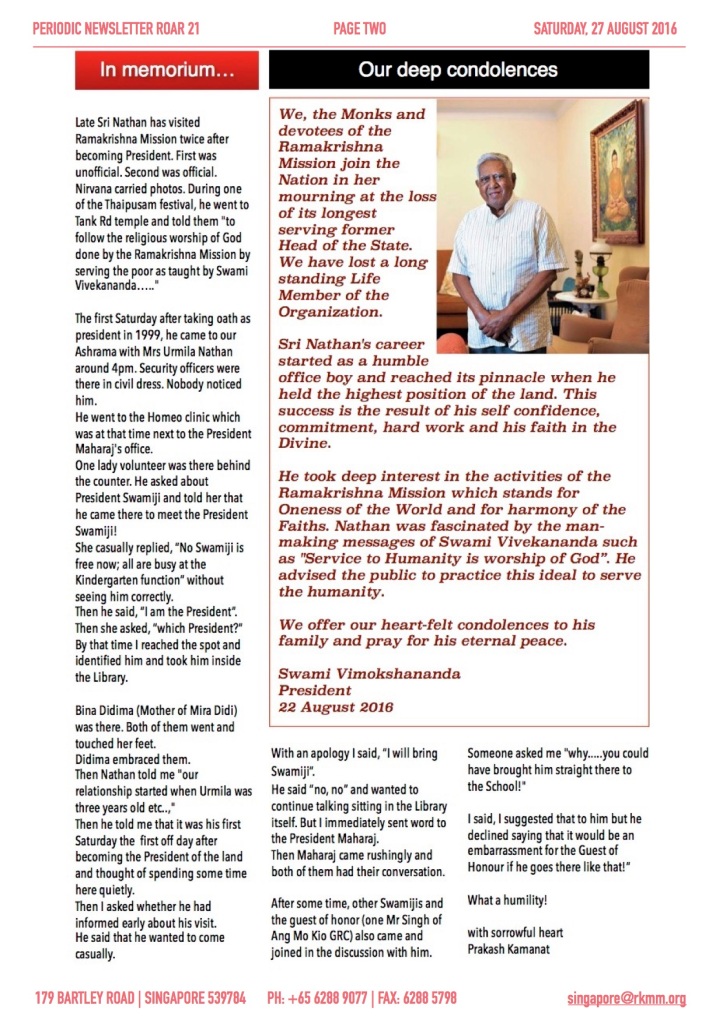 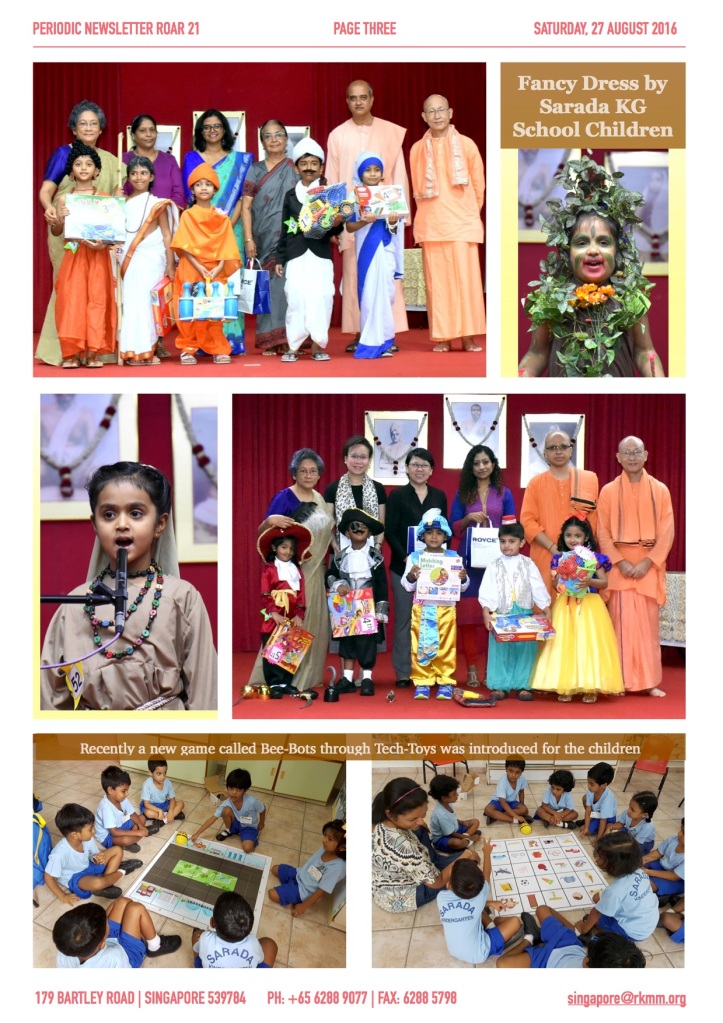 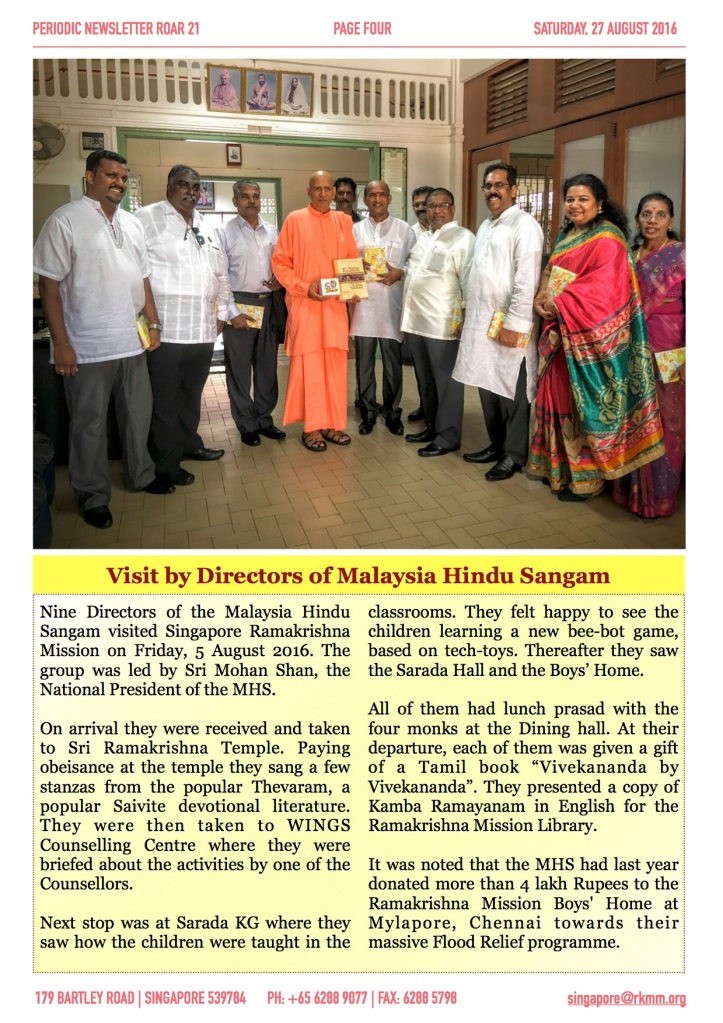 Swami Virabhadranandaji is the Head of Ramakrishna Mission’s Malaysia branch. His visit to South Africa was memorable in many ways.

He arrived in Durban, on 10 June from Kuala Lumpur. On his arrival he was given a welcome reception held at HQ on Saturday weekly satsang. During his 15-day stay, he met the officials of our Centre, had meetings with many devotees, addressed different public programs, conducted inspiring Meditation Classes, performed holy home-satsangs and gave interviews to spiritual seekers. He also visited Ramakrishna Sub-Centres in Ladysmith, Newcastle and Dundee in Northern Natal.

At Ladysmith Sub-centre, Swami Virabhadranandaji gave his Keynote address on 16 June which is a National Youth Day in South Africa. More than 250 youth members participated. A special satsang in honour of Swami Virabhadranandaji was held at our Pietermaritzburg sub-centre, where he conducted Guided Meditation and also addressed the congregation. At Chatsworth sub-centre he participated in the half-day Vedanta Retreat wherein he gave his keynote Address.

Earlier the Swami addressed a Satsang meeting held in Sri Sarada Devi Ashram at Asherville. In HQ, he spoke to the members of the Sarada Devi Women’s Circle. At Phoenix sub-centre he gave Talks to the Senior Citizen Forum members. The Meditation classes conducted by him including the Vedantic meditation and Class on Bhagavad Gita in HQ, drew lot of appreciation.

He was taken to Abalindi Home, one of the NGOs with which the Centre is associated for nearly a decade. The Ramakrishna Centre of South Africa has used a multi-dimensional approach in all its welfare activities over the last 65 years. This vision and strategy ensures that our support and services reach those in need in all areas of society irrespective of race, gender or creed. The Centre works with many NGOs with similar aims and objectives to provide much needed community services.  The Swami was moved to tears when he saw the plight of Terminally Ill Patients. But he was happy that with our Centre’s help, the Home is giving a decent and dignified living just before death.

The divergent flora and fauna of South Africa delighted him.  A special visit was arranged at one of the Drakensberg Resorts for a night’s halt on 19 June. That was a good relaxing experience for the Swami after a hectic tour of 7 days. The rural beauty of this country, with rolling hills and rising valleys, fascinating freeways, expansive open spaces of the country side with enticing autumn gold trees in the horizon and a vast vista of waves of mountains vying with each other in meeting the skyline, made a deep impression on him. Visiting Ushaka Marine World to see the Dolphins’ dance and aqua creatures in the undersea ship wreck, the crocodile creek, the South Coast and also the Botanical gardens made him feel thoroughly rejuvenated.

He evinced keen interest in the local Zulu culture and enjoyed the Zulu people’s hospitality with their feet tapping music and dance. He visited Valley of Thousand Hills where he interacted with many Zulu people.

On 25 June, the Exco officials bid him farewell and thanked the Swami heartily for his brilliant and inspiring lectures.  The Swami, in his reply pointed out, his delight with devotees who are serving the Holy Trio with unconditional love and how he was brimming with joy in witnessing the Master’s work being carried out in South Africa so meticulously. He was full of praise of sincere devotees who served the Centre from decorating the altar to dishing out the prasad.

On the morning of June 26, Saradaprabhanandaji, officials and self saw him off at Durban Airport. On his way back to Kuala Lampur he would stop for a short while in Mauritius branch of the Ramakrishna Mission too.