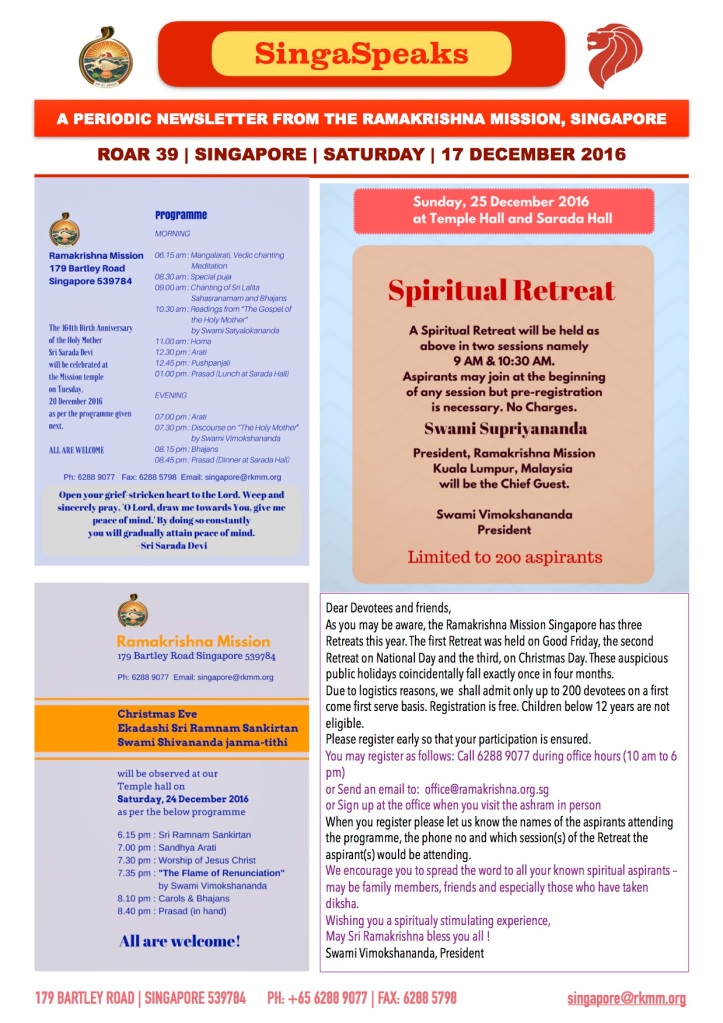 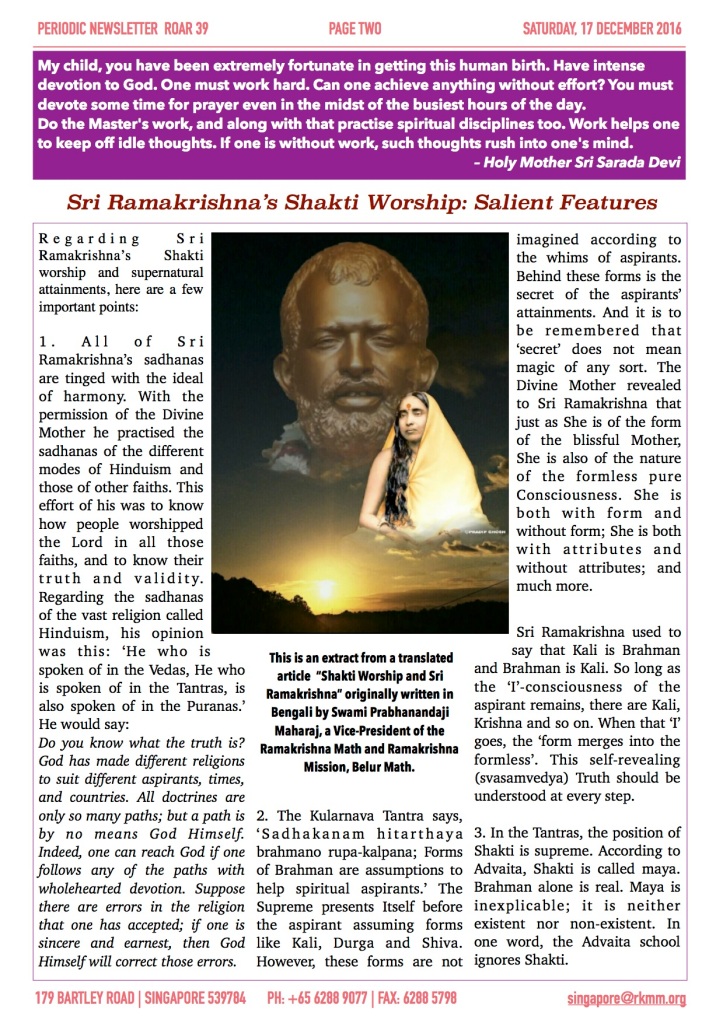 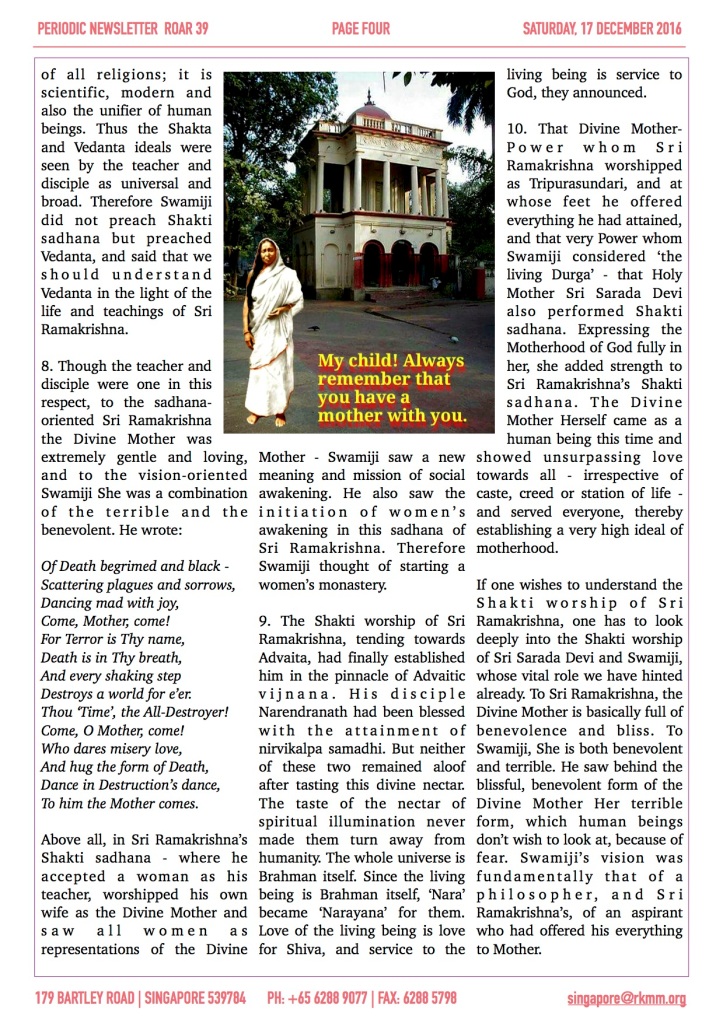 Sri Guru Purnima was celebrated on 19 July 2016 at the Singapore Ramakrishna Mission. A special Puja for Sri Ramakrishna was done and a Talk on “Holy Mother as a Guru’ was delivered by Swami Vimokshananda, President of Singapore Mission. In his Talk, the Swami narrated three incidents from the Life of Holy Mother namely how the devotees like Surendranath Sen, Premananda Dasgupta and a porter at Vishnupur railway station received diksha from the Mother. He elaborated the idea of Guru Shakti and how it lives on for the benefits of the disciples. One can listen to the Talk here. Bhajans and chanting on Gurus and Sri Ramakrishna were sung. All the participants offered pushpanjali and they had supper prasad. More than 250 people joined the celebration.

Here is a slideshow of the event.

——————————————————————————-
Ramakrishna Centre takes special care of growing number of students in its congregations. There is a regular weekly class on Hinduism at every Sub-centre and its main centre. Annually all the children come together for staging the most memorable Children’s Cultural Function. Twice in a year the centre conducts a sort of Retreat for these children. These programmes make different aspects of our ancient wisdom and practice familiar to the children and youth.

Swami Gitanandaji was born in Arial village of Dhaka district (now in Bangladesh) on 17 April 1924.

In April 1973, he was appointed a Trustee of Ramakrishna Math and a Member of the Governing Body of Ramakrishna Mission. In June 1974, he was elected an Assistant Secretary of the twin organizations, and in April 1975, he was elected Treasurer of the Math and Mission. In 1985 he was re-elected an Assistant Secretary in which capacity he served for a decade.

He was elected a Vice-President of the Ramakrishna Order in April 2003, which office he held till the end. During his spiritual ministry, he blessed many devotees with mantra diksha (spiritual initiation) in different parts of the country. He has two Bengali books to his credit: Sri Ramer Anudhyan (Contemplation on Lord Rama) and Bhagavat Katha (Selections from the Bhagavata).

The news of mahasamadhi of Most Revered Gitanandaji reached me in the morning of 14th March when I opened my laptop to check my emails. Bowing to him mentally, I re-read the news. Immediately my mind was occupied with nostalgia about my brief joyful association with this holy monk.

Widely known as ‘jaapak sadhu’, he was a veritable inspirer in our spiritual life. The very first time I met him in Belur Math at the start of my Training Centre session, he lovingly enquired about my stay at Kanpur. He was once working as Assistant Secretary in the Kanpur ashrama. I told him that the shrine in that ashram was exceedingly beautiful. He then went on telling me how he would love to do his sadhana in that shrine where he found Master ‘living’.

Due to perhaps ‘Kanpur-connect’ there was no bar even if I go and sit at his office just to exchange a few loving words. He was one of the Assistant Secretaries then. I was able to go to his room too whenever I was pleased to. In those out of office hours, I had found him in his room sitting straight, doing japa with his mala in his hand. The screech of the door opening would make him realise that someone was in and slowly as if he was awakened, he would so welcomingly invite me to take my seat. There was not a single time I found any expression of “you fellow disturbed me”!

Two times in my association I had seen his tears flowing down his cheeks. The first time I was stunned at his shedding tears. I innocently enquired of him whether he was finding any physical discomfort. He affirmed no and said that the only discomfort was that he could not do ‘enough’ japa!

The second time was a memorable travel with him in the same car from Jamshedpur to Ranchi Sanatorium. I should mention here that he was once the Head of Ranchi Sanatorium and my being Head there somehow brought me closer to him as I would always convey the pranams of the old employees especially of the tribal ones for whom he had great love. In the car of course his Secretary was also present. As I knew that Revered Maharaj was fond of stories of Shri Ram, I picked up the subject of his then recently released Bengali book on Shri Ram. I did read it and I could start the discussion on the relationship that Shri Hanuman had with Shri Ram. And in a childish way I asked him whether he knew that once Shri Ram was about to ‘kill’ his greatest devotee Shri Hanuman.

I could see his face on the front small mirror of the car instantly changing pensive. “Tell me, tell me” he quickly responded with perhaps some sort of anguish. He exclaimed loudly how Shri Ram could even think of annihilating his own servant-devotee Shri Hanuman! Lo! It was impossible! Continuing the story I built up the climax scene when Shri Ram had strung the brahmaastra onto his bow and that he was just ready to aim on his ‘dearest’ target, tears swelled in Revered Maharaj’s eyes and he could not stop sobbing! His Secretary and self were just amazed at the emotional involvement of Revered Maharaj had while listening to the story where he could not ‘accept’ the fact that Shri Ram would kill Shri Hanuman. Of course the story as usual had a happy ending with Shri Hanuman being embraced by his Lord Shri Ram. He was greatly relieved at the turn of the events in that story and he was much appreciative of this wonderful legend.

A Treat to Tribals

One more thing that touched my heart about him was his loving nature towards tribals. At Ranchi Sanatorium he would sit on a bench kept outside in the entrance verandah. Next to him would be our Durga maharaj. But both would remain silent and would not have any conversation for a long time. While Durga maharaj would be immersed in his loving prayers, Revered Gitanandaji would continue in his japa in spite of the cushioned sofa set kept apart for the ‘Vice-President’ in the lounge. If pointed out by any monk, he would assert that he was happy to sit in a bench. Then quickly he would ask that monk whether he was keen in ‘his’ happiness! The monk had no other option but to allow his own way.

Besides the treatment facilities for the TB patients, the Sanatorium had by then expanded into many types of rural development activities wherein the tribal – old men and women and also children – getting direct benefits. I took him to some of the nearby villages where he was extremely happy to see those old people whom he knew personally. He was charmed at the welfare measures that go directly to the service of the poor. He encouraged all of us to perform these welfare activities thinking that Master and Mother are being served.

Indeed he was always an inspirer to the monks and brahmacharins.

Here is a slideshow of four pictures of Swami Gitanandaji when he visited Ramakrishna Mission TB Sanatorium on 19th September 2004.